This is a little bit off of my usual subject but since I write about a fictional alien civilisation and The Sealand Skull Hoax is about potential alien skeletal remains found on Earth, I thought it was interesting.

I first heard about the Sealand Skull in a Youtube compilation video called, "10 Most Bizarre Skulls & Skeleton Discoveries" and I was immediately quite interested in it because it looks somewhat humanoid but the oversized eyes, extended canines and very narrow jaw completely eradicate this possibility so what is it? 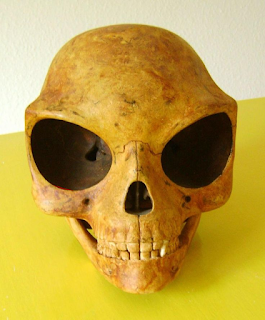 The Sealand Skull is supposedly a skull discovered in the town of Ølstykke on the island of Zealand in Denmark and as you can see from the pictures above, it looks like the typical big eyed, grey alien from recent fiction.

The video, 10 Most Bizarre Skulls & Skeleton Discoveries, implies that some scientific examination of this skull has been performed and it has been carbon dated to 800 years before present. This would mean that the skull dates back to around 1200AD during the medieval period in Northern Europe and just 100 years before the Great Famine.

I immediately thought this precise date sounded strange because carbon dating (aka Radiocarbon dating) isn't that accurate and usually has a plus or minus number of some amount of years to indicate a date range rather than an exact figure. Read more about that in this explanation of radiocarbon principles by Canadian Archaeology.

Anyway I wanted to learn more about the Sealand Skull so I decided to look it up. The first thing I noticed was that there were no mentions of this skull in any kind of professional publication. That doesn't necessarily mean that it's a hoax but it certainly is telling because if it was radiocarbon dated, where's the write up of this?

The first article I saw in my search results was, "Sealand Skull: Horse, Hoax or Something Else?". This is a deeply problematic article for many reasons but the part that I found personally offensive (because I'm a qualified archaeologist...) wasn't the part where it's implied that this skull was somehow mistaken for a horse skull because of equine butchery having previously occurred at the dig site, no what annoyed me was this:

"Local residents from generations ago mention a Neolithic clan calling themselves L’Ordre Lux P Pégasos or the Order of Pegasus Light. These people were said to have been guardians of several items of significance, including a mysterious cranium.

However, not much is known about this order. But, it was known to have been founded in 1350 and rumored members included notable names such as Shakespeare, H.G. Wells, and Thomas Jefferson."

This is ridiculous. The Neolithic period is part of prehistory. The most recent part and though it only ended about 3700 years ago in Northern Europe, not only is that too long ago for anyone to have a memory of "a Neolithic clan" who could strangely speak broken Catalan (a language that didn't even exist until it developed from vulgar Latin around 1100AD), but if older generations could remember the Neolithic, why would archaeology exist? Surely we could just go and ask a random elderly person what happened nearly 4000 years ago...

Anyway, after reading this article and seeing the evidence for this skull being genuine was basically non existent, I decided to do a reconstruction to see what the face might look like. I've never done a reconstruction before but I have studied human skeletal remains as part of my qualifications. This is what I came up with: 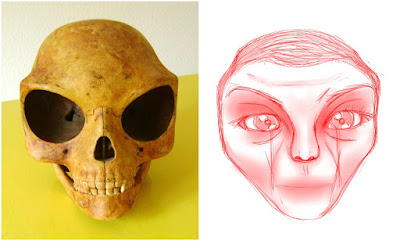 My drawing skills aren't great but nonetheless this has a vaguely human appearance. I left my construction lines on to show how I came up with this face, but humans are a type of ape and this doesn't look like any of the other ape skulls be they gorilla, orangutan or chimpanzee. It could have been a deformed human but the elongated canines make that impossible so what could it be?

It looks quite a lot like a monkey skull from the side but the teeth are still wrong, there don't appear to be any ear holes (unless that small dimple is supposed to be it) and the skull doesn't appear to have many places where muscle would attach to bone which means that it could not have functioned on a living individual. 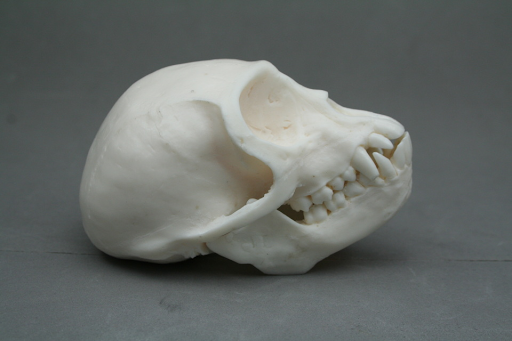 This is a replica Vervet monkey skull from the website: Replica Vervet Monkey Skull (crimsonrichdesire.co.uk)
Anyway I thought of adding hair to the image might help to show that it's a monkey. 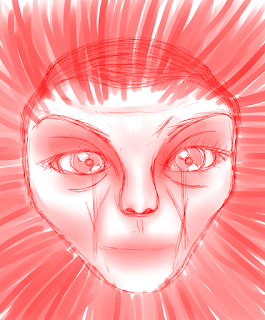 I added some "hair" (actually just scribbles) to match a Vervet Monkey and this is the final image I came up with. I believe that this is a hoax and someone simply created a large monkey like skull, (that's assuming that this skull is as large as it is portrayed to be. The chairs in the background of the side images could be misleading and there's no measuring stick to indicate the size of the specimen / artefact. That's a sure sign that these images were not taken in a professional organisation used to cataloguing finds. The elongated canines give this a vaguely vampiric appearance.

My reasons for believing this skull is as fake as fake can be are the lack of evidence that any scientific analyses of this skull were ever done and the fact that to me, it looks fake. I've dealt with human and animal bones in an archaeological context before and this simply doesn't look real. The colour is wrong. If the skull were ochre in colour (which can happen when the soil in the burial environment basically dyes the bone), the inside of the eye sockets and nasal cavity would also be that colour. They're darker.  The teeth are also simply wrong. They are worn down equally and have been discoloured just like the porous bone of the skull even though teeth have enamel and usually remain paler than the bone when dyed in situ and do not wear down at an equal rate.

It's very clear that this skull is a forgery just like Piltdown man, the scientific forgery that has every thinking person questioning the validity of any discovery of hominid remains.

Labels: Alien archaeology hoax sealand skull
Miss P. Candice Goddard
I'm a human and I like writing. I'm inquisitive so I enjoy learning about new things but mostly about people and human culture.