This page contains my artistic offerings. As you can see they aren't as good as my sister's but I still try.

Many of the pictures are based on Draw Your Squads and other drawing references which I first tried on Pinterest. Whilst creating these pieces I have been trying to improve my digital and cartoon drawing ability. I think it's working since IMHO these images look better than those on the Altered and Better Off Dead stories which were made over two years previous.

This image was created from a reference found on pinterest. I "tried" it and decided to use the first eight of the most handsome men in the Alliance as voted for by the women of their universe (I don't necessarily agree). The large blue skinned man with purple hair is Shagmoore, whose children are shown in the next picture.

This image is based on a DYS. In my version these five siblings have jumped off of a waterfall. The characters shown from the top are Princess Sedussa of Lilit, the youngest sister and product of an affair between Prince Shagsmoore and Queen Neolani of Lilit. She is also the sister of Princess Selene from my sister's art page. Next is Roxzamora, the central character of Adhara Space Station. Next to Roxy is her android sister Constellation. Directly below Roxy is the eldest sibling, Foxzia, second in line to the throne of Bim and a registered eccentric. Last by not least is the only male sibling, Bettoore.

This was a 12 person DYS that I used to illustrate the student council of Adhara's most prodigious school, Adhara Academy.

I think this was an art challenge. I illustrated, Shelley and her younger brother Byron taking a picture to send to their mother who is on tour. Behind the children is their drug-fiend father Eric apparently coming to spoil the fun.

This mer family started off as a joke as you can no doubt tell by their ridiculous names. Now these people are an integral part of the story of the Varunian Mer Kingdom. La-Shar-Ra-Qwon-Do is the sister of the Mer King, she's a colourist merwoman and maternal aunt of Ula Quintilica featured on my sister's art page. Shown with La-Shar-Ra are her husband Imb-Rimba-Simb and their son, Ta-Kunta-Ta-Kinti. 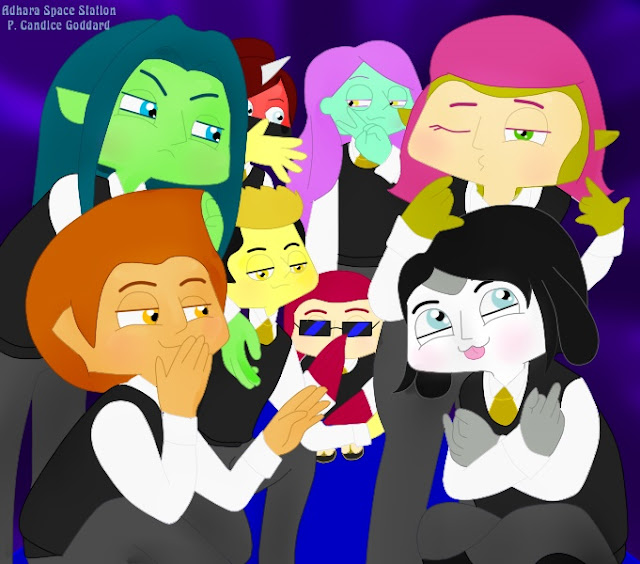 This picture is taken from some sort of DYS or reference image, I'm not quite sure which. This shows more students from Adhara Academy. With the exception of the mutant in the middle, these boys are members of a boy band called, Pyjama Party.

These naughty twins are cousins of Roxzamora from the planet Bim. I used a reference image I found on pinterest to illustrate them peeking at something that they obviously find fascinating. 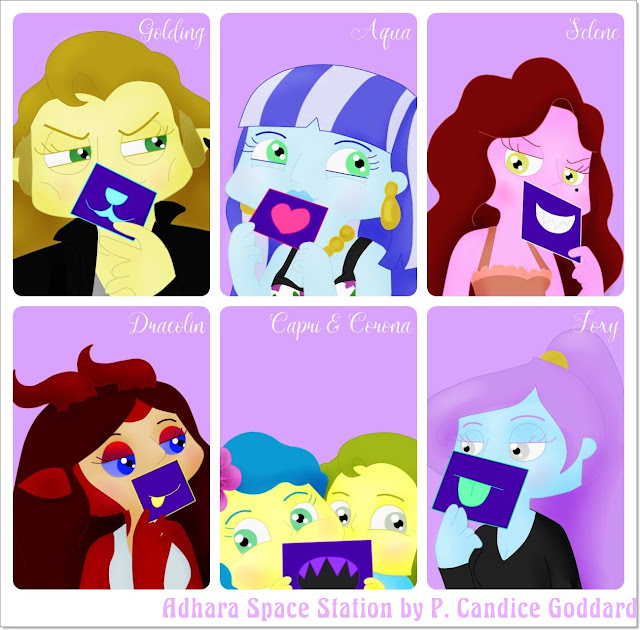 This was an art reference into which I placed my characters. Prince Golding is shown here with his wives (he doesn't technically have a harem though) and two of his children. 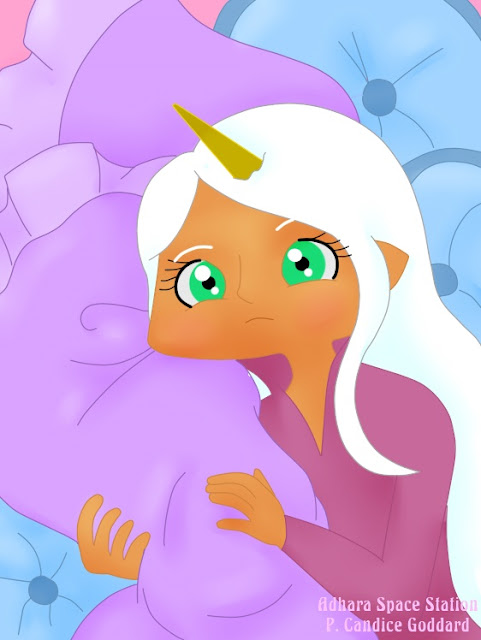 Using a reference image I found on pinterest I created this illustration of Princess Magical or Magi. She is the sister of Princess Mystical found on the other art page. I'm still no good at drawing hands but I'm still working on it.