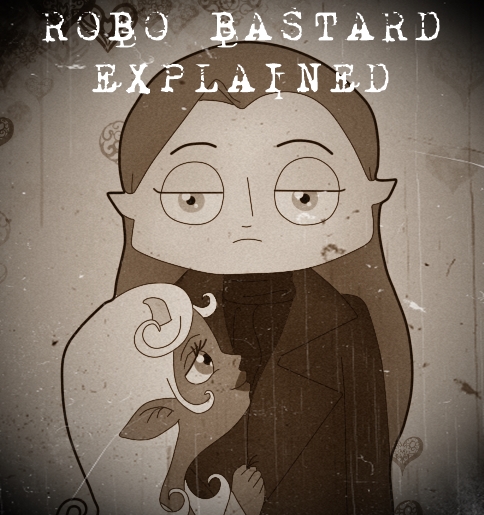 After a lot of thought into the kind of stories I've been putting out, I've decided to start posting additional entries by way of short explanations of the thought process behind my works. Why did I write them? What was my objective? That sort of thing.

I started to believe that this might be necessary when I realised that nearly all of my characters are a bit insane and the stories aren't really happy. I don't know if I simply lack the capacity to write sane people or what the reason is but I feel that I need to explain myself so I will. I'd like readers to enjoy the stories that I write and in my personal experience knowing some of the background to a piece of creative work helps with that.

I'll start off with the last story I've posted, 'Robo Bastard', the story of Prince Forget-Me-Not's android Facts started off as a reaction to the problematic emotionless characters in science fiction television series like Star Trek.

Two famous examples of supposedly emotionless characters in the Star Trek franchise are Mr Spock from Star Trek , now known as The Original Series and Mr Data from Star Trek: The Next Generation. 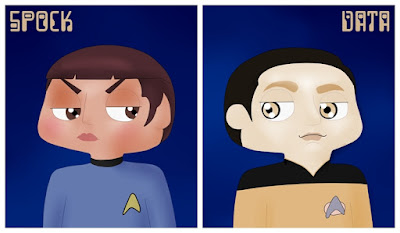 I love pre 2009 Star Trek, let me just be clear about that but certain aspects of the episodes have always been deeply problematic for me. Both Spock as a Vulcan-human hybrid and Data as an android claim to be either suppressing their emotions or completely and utterly devoid of them.

This is actually a formula that would be followed in each success iteration of Star Trek due to the overwhelming popularity of Leonard Nimoy's Spock. There as Data is TNG, Odo in DS9, Tuvok and Seven of Nine in VOY and T'Pol in ENT... anyway I digress let me get back to the point.

So there I am loving Star Trek to my heart strings like any 1980s born socially isolated nerd would, when I started to get creeped out and annoyed by the way that emotionless characters like Spock had stalkers who refused to take no for an answer.

All the years of watching Nurse Chapel and other women desperately gagging for Spock's attention didn't really phase me to be honest, maybe because Spock was the original tsundere. Maybe it was because I always perceived him as a liar. He clearly had emotions and he was clearly a smug git pretending to be aloof. I really liked that.

It wasn't until I paid close attention to The Next Generation episode 'In Theory' in which some woman develops a romantic attraction for Data and then has a romantic relationship with him that I started to be a bit annoyed. Let's just glaze over the fact that Data had already had sexual relations with Natasha Yar in a previous episode called 'The Naked Now' (yes, I named the adult establishment after this). Data is an android with no emotions at all. He doesn't have them. He's not a Vulcan purposely trying to suppress his feelings. Emotions literally aren't supposed to exist in Data because he's an android who wasn't programmed with them. And yet in nearly every episode there are characters who insist that they can see emotions in him. I find that kind of personification both really annoying on one level and then thinking about how to solve that problem, incredibly funny. So I decided to write a story about an android who really doesn't have emotions and the kind of person who would actually insist that it does.

When I was writing the story I was thinking about how a complete and factual lack of emotions would manifest. Discussing it with my sister we quickly realised that it would mean not even a basic curiosity in anything. You can't be curious if you don't have emotions because curiosity is a "desire to know or learn, inquisitiveness". Basically it's an emotion.

I think curiosity is one of the first emotions in any animal because it's satisfied by the five senses. Human babies learn through curiosity, they do basic scientific experiments by observing an object through sight, sound or smell, feeling it and then tasting it. So any creature that really has no emotions literally has no interest in interacting with the world on any level.

I called the story 'Robo Bastard' to emphasis the mechanical nature of androids. The word android is an amalgamation of "andro" meaning man and "~oid" meaning "like" as in "formed like". So an android is an "automaton resembling a human being in form and movement" basically a fancy, human looking robot. (I use android for both male and female looking robots since I don't care about the sexual dimorphic differences enough to call female robots gynoids. One word fits all in my writing.) The word 'bastard' was used to illustrate the reaction that a narcissistic, histrionic or erotomaniac stalker would have to someone who didn't play into their behaviours.

I been fascinated by erotomania ever since I read, 'Enduring Love' by Ian McEwan for A Level English years ago. Even the concept of erotomania is scary to me because there's nothing that the victim could have done that would have prevented the person who was fixated on them from attaching themselves. It's all based on mental illness and self delusion.


So that's how I came up with the story 'Robo Bastard', the desire to write about an emotionless android and seeing how that would play out for a narcissist. I think that making jokes of unrequited love and sympathising with the devotee is problematic. It's not funny at all, as victims of stalking or cyberstalking like myself will now.

Before I wrote the story I had to design the characters. The first design for Facts was as pink haired with purple skin and pink on black eyes. 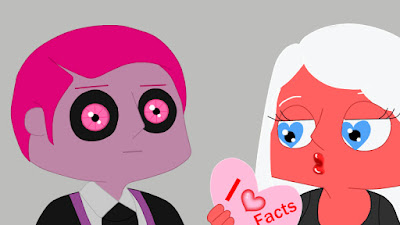 Annabelle was a red skinned Bossian with white hair and blue eyes and though her design didn't change much over the years (it's been about three since I wrote the first part of the story), when I redrew her for DYO on pinterest I did change her a little bit: 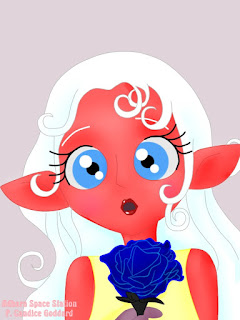 I started to think that perhaps this version of Annabelle wouldn't fancy the Facts pictured above, so I changed his entire appearance. 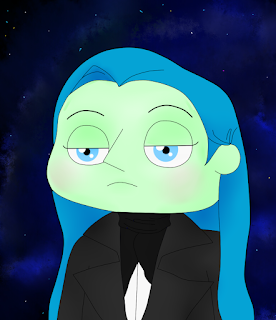 By giving Facts green skin with blue hair and eyes I made him a Ptahian like his owner Prince Forget-Me-Not. The colour scheme is more attractive and it works better with the story.


Anyway that's why I wrote Robo Bastard. I hope it doesn't seem quite so random now.

The episodes of Star Trek mentioned are 'The Naked Now' Season One, Episode 3 and 'In Theory' Season Four, Episode 25 are available on Netflix.