Quinn and The Quasars 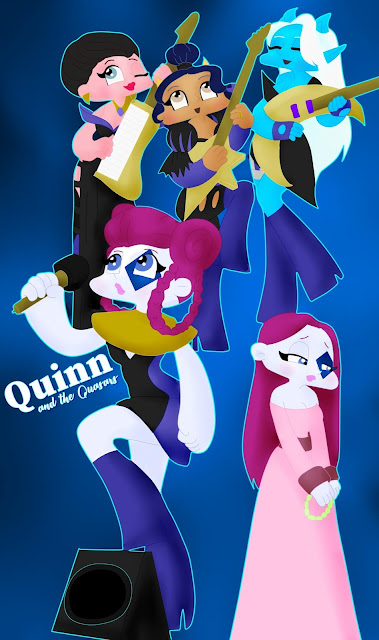 Quinn and The Quasars had just completed their first Alliance wide tour with a sold out concert at the Imperial Duat Hall on Adhara Space Station. The venue had been filled to capacity with a small crowd of 5,000 but the show had been simultaneously broadcast pay-per-view to several billion across every world in the Alliance.

“That was amazing!” Quinn squealed looking at her band mates Indigo, Ran and Kailani as the sound of the roaring crowd was dimmed out by the closing dressing room door. “I can’t believe we’ve made it this far.”

Indigo snorted and pouring herself a drink from the bar she made a toast, “To continued success,” she said and then quickly downed the golden brown liquid. “We made it all the way back to Adhara.”

Quinn ignored the slight mocking tone in Indigo’s voice as Ran said, “Look at this. The news is saying that with a performance like that we’re sure to be the biggest thing in Alliance history.” She held up her Com-D for Quinn and Kailani to see.

Quinn quickly read the article on the proffered device out loud for the benefit of the others in the room,

The band has moved to new heights making love to music and the audience.

Adharian born Quinn + The Quasars made their tenth performance on a grand stage after achieving Alliance wide fame a year ago in Cygni’s famous Tidal Wave Arena. The five gave a performance far in advance of their years in the industry, making love not only to the music but to the crowd themselves.

Quinn Zanni, frontwoman of the band embodied the inherent magnetism of the heavenly bodies that she and her group are named after. A true star in the making. Similarly her band mates, Ran Floe, Kailani Allure and Indigo Night electrified the stage with their intense and awe inspiring playing.

The combination of Zanni’s singing and the Quasars’ playing leaves no room to question that they are well on the way to being one of, if no the best band The Alliance has ever seen.

“Well I guess that’s something.” Indigo shrugged slurping down another drink. “Maybe we’ll make it after all.”

Kailani rolled her eyes, “Ignore her.” Eric was supposed to come to the show but he made some excuse and didn’t turn up. Indigo’s just upset.”

Quinn cursed herself for not realising. The Alliance tour had taken the group around the Alliance, away from the station where Indigo lived with her husband Eric and baby daughter Shelley. What with preparations for the tour there hadn’t been time for Indigo to go home to her family before the show so she had arranged for Eric to attend and then meet her backstage afterwards. Seeing Eric and Shelley had been the one thing Indigo had been looking forward to but Eric hadn’t turned up.

Quinn handed the Com-D back to Ran and made her way over to the bar where Indigo was topping up her drink, “Don’t worry Indigo, you’ll get to see Eric and little Shelley in a while and everything will be perfect. I’m sure something really important came up and that’s why Eric couldn’t make it,” she said trying to comfort her best friend.

Indigo smiled at Quinn and was on the verge of thanking her when there was a knock on the dressing room door. Quinn smiled at Indigo, “Maybe that’s him now,” she suggested hopefully as Kailani opened the door. Two security officers stood on the other side with Lee Jae-Seong, their manager.

“I’m sorry girls,” Mr Lee said rubbing his hands together nervously. “I tried to hold them off but they said they would wait until the end of the performance and no longer.”

“What are you…” Kailani began but the two security officers walked past her straight towards Quinn.

“Are you Ula Quintilica Zanni, Princess of the Fish Kingdom of Varuna?” one of the officers asked.

“You know that I am,” Quinn replied dumbfounded. The officer questioning her was a former schoolmate and friend Aleister Trice. Quinn hadn’t seen Aleister since she and the Quasars had graduated from Adhara Academy but she had heard that he had attended The Alliance Academy on Draconis Space Station and was now working in Alliance Security aboard Adhara. That didn’t however stop her from being surprised by the manner in which he was speaking to her now.

“In that case, I’m placing you under arrest,” the other officer, a Lilitian that Quinn didn’t recognise said grimly. “Ula Quintilica Zanni, Princess of the Fish Kingdom of Varuna, you’re under arrest on the suspicion of murder.”

A collective gasp went up from the Quasars, “Murder?” Indigo asked dumbfounded, as she put her half finished glass down on the bar. “Who the Duat has been murdered?”


The Lilitian officer ignored Indigo’s question and started moving towards the door of the dressing room leading Quinn by the arm. “Aleister!” Indigo called, rushing over to her old school friend. “What’s going on? Answer me!”

Aleister looked down at Indigo through the tinted glasses he perpetually wore to protect others from his piercing gaze. His stance seemed to suggest a soften gaze but his glasses were so dark that Indigo couldn’t tell. “Indigo just trust me for now,” he said reassuringly. “I don’t think Quinn did it but it looks bad.” He glanced at Ran and Kailani who were staring at him from across the room. “You’ll all need to come down to headquarters tomorrow to give statements.”

Aleister moved towards the door about to follow his colleague and Quinn but before he left he turned back to his former friends, “Maybe you should go to the Pearl Palace,” and with that he was gone.

Next Chapter
Labels: adhara space station Aleister murder mystery Quinn Quinn and The Quasars
Reactions:
Miss P. Candice Goddard
I'm a human and I like writing. I'm inquisitive so I enjoy learning about new things but mostly about people and human culture.