Quinn and The Quasars: Chapter Nine 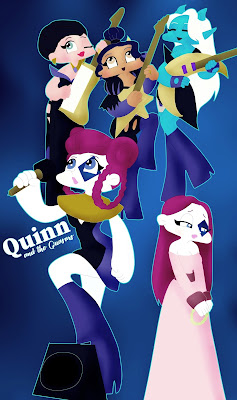 Quinn turned back from the door, “No,” she said shaking her head with annoyance. “I’d rather just hurry up and get this fiasco over and done with, besides, if we’re going to my home anyway what’s the point of getting changed here? I’ll wait until I get home.”
“As you wish,” Serpentine replied curtly. He had been only been thinking of Quinn’s best interests but she had been only too quick to embarrass him in front of her former sweetheart. The fact that Princess Ula Quintilica had been arrested for murder was bad enough, but Quinn had been arrested almost as soon as she left the stage. She had, had no chance to change out of her sweat drenched stage costume, nor any chance to remove her smudged make-up. Serpentine had imagined that Quinn would thank him for bringing her change of attire so that she would not been embarrassed even further when they left the Security Headquarters. Perhaps if Asger had not been there Quinn would have been more receptive, but Asger’s seductive influence was clearly warping Quinn’s mind.
“We need to get to Pearl as quickly as possible,” Asger said moving towards the door. “Whatever can clear Quinn’s name is of paramount importance.”
“Indeed,” Serpentine replied, smiling at his rival. He watched as Quinn opened the door and was greeted by her maid and the female officer who had been waiting to take her to change clothes. Asger had directed his comment at him but it had been done for Quinn’s benefit, Serpentine was sure of it, he had agreed with her after all and even gone out of his way to abbreviate the name of her home to show his familiarity with the family. It had been a sly kick in the teeth to Serpentine.
The Varunian prince looked up from his reverie and saw Asger watching him, “Shall we go?” Asger asked with a friendly smile.
“Sure,” Serpentine said, returning the smile but no sooner had Asger turned his back and followed Quinn out of the room, than Serpentine’s eyes narrowed into slits.

Note: The spelling of the name Asgar changed in this chapter because my sister, the original creator of the character informed me that I had misspelt it. Apologies if this has caused any confusion.
Labels: Asgar Quinn and The Quasars Serpentine
Miss P. Candice Goddard
I'm a human and I like writing. I'm inquisitive so I enjoy learning about new things but mostly about people and human culture.