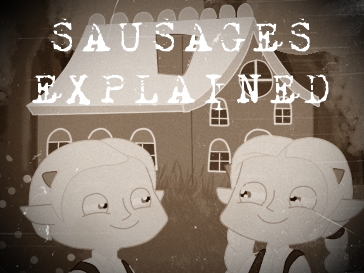 Possible Spoilers to follow so read the story first if that kind of thing bothers you. You can find it here: Sausages.
The inspiration for Sausages is fairly obvious I think, it’s the German fairy tale Hansel and Gretel, the story of a young brother and sister who are abandoned in the forest by their starving and desperate parents. Eventually the children find their way to a wonderful house made of gingerbread and sweets and after scoffing off a good part of the abode, are tricked by the occupant into becoming her servant and next meal. The clever children are able to escape by shoving the old lady into her own oven before slamming the door on her, stealing her valuables and returning to the parents who had abandoned them. Great story...

Like most people I love fairy tales and the fact that they were originally written for adults but then somehow became stories for children is something that has always interested me. That’s how I ended up writing Sausages. I wondered what would happen to a cannibalistic witch in the Adhara universe where I have developed a very child centric environment and the children are just as “evil” as the adults. I decided to experiment with the idea.

One of the main features of the original fairy tale which maybe is overlooked by current casual readers is the famine which is the catalyst for all of the events that take place in the Hansel and Gretel fairy tale. This is key to understanding Hansel and Gretel because when this story was first being told famine and potential starvation were very real threats to almost everyone on the planet. In Europe there had been periods of terrible starvation such as the Great Famine  in the early 14th century (1300s) and the Black Death. When Hansel and Gretel and the similar stories which preceded it were first being told the contemporary audience would been very familiar with the kind of choices that Hansel and Gretel’s parents took when abandoning their children in the forest and the cannibalistic old lady or “witch” who tried to eat them. Even St. Nicholas the historical Christian saint who was bastardised into Santa Claus had to deal with murdered children and potential cannibalism. Cannibalism for one reason or another was very prevalent in European society for many centuries so in my opinion the “witch” wasn’t particularly a source of supernatural horror more like a real threat if a child wondered into the woods and happened upon something that appeared too good to be true.

A vaguely similar legend called “The Babes in The Wood” predates Hansel and Gretel by a few hundred years and originates in England. The Babes in The Wood is the tale of two orphaned children who are abandoned in a forest, supposedly Wayland Woods, Norfolk, England so that their greedy or demonically evil uncle (whichever explains his actions) doesn’t have to care for them as he had promised their dying parents. Unlike the fairy tale Hansel and Gretel however the unfortunate babes aren’t cunning and clever and able to take back a fortune to their neglectful parents. These babes die starving and alone, the actual fate of most children abandoned by their parents during times of economic hardship even today. That’s how I came up with the idea for Sausages.

The Thothian witch aspect plays up on how postmodern readers think of the “witch” from Hansel and Gretel, as a literal figure who practised witchcraft or black magic instead of a desperately hungry person lurking in the forest and willing to do anything and eat anything to survive (which by the way is also the origin of werewolf and vampire legends but that’s another story). I also used that aspect to show what I personally see as the fallacy of contemporary people reverting to pre-Christian “pagan” beliefs in some parts of the world regions in an attempt to claim that Christianity (and other Abrahamic religions which are the more complained about group) for example somehow infringed on a “better” or more humane way of life in ancient Europe, the Middle East and The Americas. It didn’t. In many, many ancient cultures ritual human sacrifice, particularly the blood sacrifice of children was the norm. Historical accounts and archaeological evidence for this are fairly undeniably. This has nothing to do with the high levels of infanticide that was also practised for various social and economic reasons or the sexual abuse of children and teenagers.

So I guess long story short Sausages is about my absolute hatred for people who harm children and those who propose going back to a way of life which normalised child murder and abuse. It’s a pet peeve of mine simple as.
Labels: Axel und Adele sausages The Lesser Chapel of I-Am Thothian Witches
Miss P. Candice Goddard
I'm a human and I like writing. I'm inquisitive so I enjoy learning about new things but mostly about people and human culture.