Quinn and The Quasars: Chapter Four 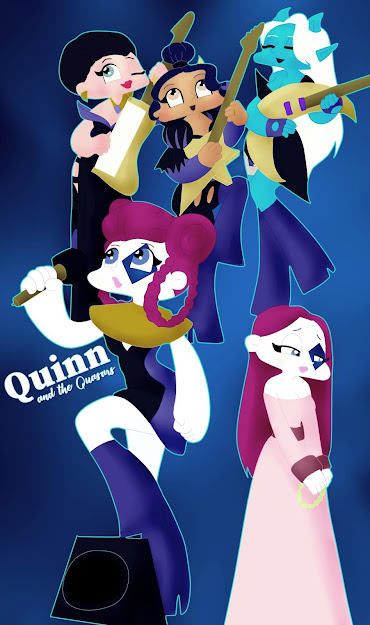 Read the story from the beginning here: Chapter One

“That was a mistake,” Ran sighed as Indigo walked up to the desk and snatched the Com-D before Junn had a chance to pick it up. “Duchess just said they knew which of the servants let Stripes into the palace. That’s information we’ll desperately need if we’re going to prove Quinn’s innocence.”

“I’ll call them back,” Kailani sighed as she cast Jun a disappointed look and hurried out of the room to fetch the girls who had just left.

“Right. Let’s see the evidence Rina and her friends have found," Indigo said flicking through the documents that comprised the dossier. "Flababians are a bit blunt but Rina wouldn't have barged in here like that if they didn't have something important." Jun shrugged sulkily but made no reply.

"What does it say?" Mr Lee asked, shuffling forward in his seat. Unlike the others he hadn't attended school with Rina, Opal or Roxzamora and had no idea about their mystery solving prowess. The girls had solved their first case when they were still in the infants, with "The Case of The Broken Crayon" and continued on from there. According to Adhara Academy Alumni Magazine, the close knit group of friends had recently been voted into the top three positions on the school council despite being only 15 years old. It was an unheard of turn of events which solidified their positions as some of the most popular students in the school and at Adhara Academy, one could only get to that level of popularity by being exceptional.

“Well I don’t see the name of the servant who supposedly let Stripes in,” Indigo replied distractedly, as she continued to flick through the data on the Com-D. ”But there are photographs of the body, the crime scene and a preliminary police report as well as some background info on Stripes.”

“Really?” Mr Lee asked with open eyed astonishment. “How could school girls get their hands on that kind of information?”

“Wait! President Sexzia Thanthee? The President of The Alliance?” Mr Lee cut in. “Of course, she was introduced as Princess Roxzamora of Bim,” he muttered to himself.

“That’s right,” Ran confirmed, shooting their manager a curious look. “Roxy probably asked her grandmother to get Admiral Hag to give her and her friends access to the case files.”

“Shame Kailani didn’t think of that. We could have gotten the information first hand from her mother. Anyway listen to this,” Indigo cut in, clearing her throat as she began to read the biographical information the teenage amateur detectives had provided. “Tigre Stripes, a distant relative of Grand Duke Tigris of Bubastis was an aspiring actor who’d had parts in a couple of low budget movies. One was called, ‘They Creep on Toes’ and the other ‘The Heart Men’.

“I’ve never heard of either of those films,” Ran interrupted whilst Jun shrugged indicating that he too was ignorant of the films.

“They’re cult classics on the Big Dipper,” Mr Lee explained with a sigh. In the Alliance even entertainment was different according to social rank, space station and location. Quinn and the Quasars were from the upper echelons of Alliance society and weren’t overly familiar with culture from the lower end of the scale. It wasn’t that they were snubbing entertainment for the masses, they simply didn’t have access to it, even as entertainers themselves. “Those movies are a few years old now but there’s probably still a good fan following amongst horror aficionados.” The Quasars manager quickly explained

“It says here that Tigre Stripes didn’t have much luck securing roles after those films and for a while he seemed to disappear before turning up again as the head of Ta-Sheila’s fan club on Cygni.”

“So my sister wasn’t the first person he went after?” Jun asked incredulously. “He was after that model, Ta-Sheila too?”

“Apparently,” Indigo confirmed looking up. “According to what the girls have uncovered, Stripes acted the same way towards Ta-Sheila as he did towards Quinn and the rest of us. He even had a public diary in which he detailed his obsessions and plans when he was a devotee of Ta-Sheila. I haven’t read any of the entrees but a quick scan of the dates shows that they stop around the same time that we released our first single.”

“So they even managed to find his diary,” Mr Lee said. “That’s surprising.”

“Not really,” Ran cut in giving Mr Lee another curious look. “Roxy and her friends are pretty good at what they do and their immaculate connections make them even better.”

“This is all very interesting but how does it help my sister?” Junn asked with a hint of desperation in his voice. “Quinn’s been arrested on suspicion of murder. How does finding out that this Stripes person was a serial stalker help her? The man was found in Quinn’s bed for Empyrean’s sake. There’s no getting away from that.”

The four people in the room fell into an uncomfortable silence as the truth of Junn’s words settled in. The information that the school girls had provided was interesting but so far nothing that Indigo had related provided any proof that Quinn wasn’t the person who had killed Tigre and left his body in her bed. The ignominy of having some dead D lister in her bed was enough to ruin Quinn let alone the charge that she had killed him.

“There doesn’t appear to be much hope for Quinn,” Mr Lee said in a dejected tone. “She really must have killed Tigre Stripes.”

At that moment the door opened and Kailani walked back into the room and closed the door behind her. “The girls said they’ll only come back if Junn apologises to them,” she explained in response to the curious looks that greeted her as she stepped in. “Duchess and Roxy would have come back at once but Rina insisted that you couldn’t be allowed to get away with treating them like that so they’ve gone back to the academy.” the Lilitian said, turning her gaze on Junn who was still sitting at the desk where she had left him.

Junn chuckled mirthlessly, “That’s just an excuse. They probably didn’t know anything anyway,” he said with a smug smile. “All of the information in their little dossier was useless.”

“I don’t know about that,” Indigo blurted out. “I’ve found the file with the name of the servant who let Stripes into the palace but this can’t be right.”

Kailani sighed, “Yeah, I found it hard to believe myself when they told me,” she said looking at Mr Lee. “Of all the staff of the Pearl Palace, I would never have guessed that your wife was been the one who let that stalker in here.”
Labels: Indigo Junn Kailani Mr Lee Quinn and The Quasars Ran
Miss P. Candice Goddard
I'm a human and I like writing. I'm inquisitive so I enjoy learning about new things but mostly about people and human culture.