Quinn and The Quasars: Chapter Six 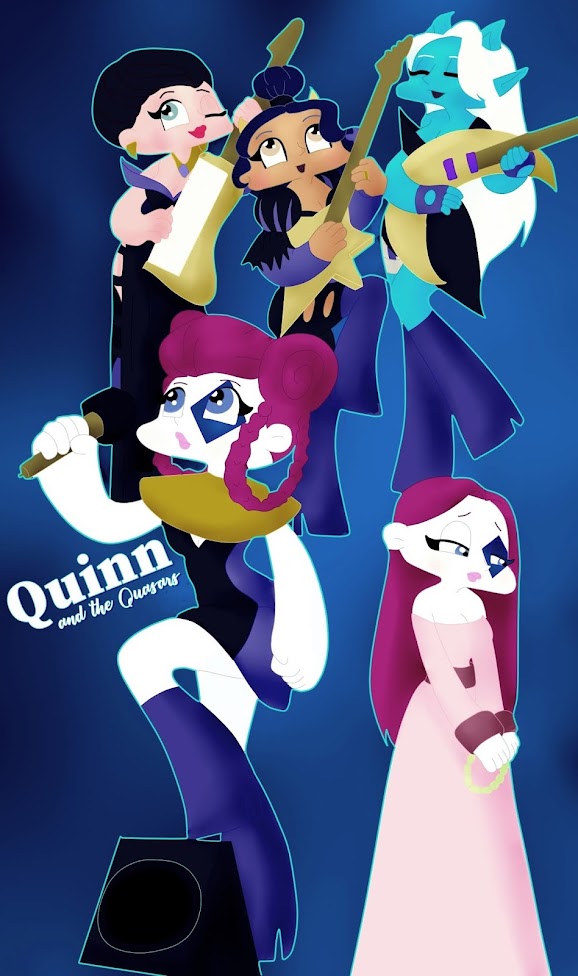 Read the story from the start here: Chapter One
Read the previous chapter: Chapter Five

“...Only a member of the Zanni family can authorise the removal and transport of such a valuable artefact.” That’s what Aleister had said. Serpentine looked at his former school friend with some confusion. He did not understand the significance of the bottle. Ancient antique or not he did not think that it was something that it was something Quinn would kill for.

“So you’re saying that this Tigre Stripes person stole the bottle and that’s why Quinn killed him?” Serpentine asked incredulously. “Quinn probably brought that
bottle to Adhara herself. There’s nothing sinister about it.”

“Oh my I-Am, will you please be quiet?” Varianna snapped turning on Serpentine with a crazed look in her eyes. “You’re making matters worse.”

Serpentine was shocked by Varianna’s outburst. He had never heard the normally quiet woman speak sharply even to a servant let alone to him. As the cursed child of the Mer Kingdom she had been subjected to one humiliation after another by her family and married off to King Regis as part of the Varunian peace keeping tradition that dated back thousands of years. Since her marriage it was widely accepted that she was the most docile of the four queen consorts of Varuna but here she was now snapping at a prince from another kingdom, her daughter’s fiance no less. There was something that Serpentine was missing but he couldn’t work out what.

“Unfortunately that’s our current theory too,” Aleister said almost apologetically. “We believe that Quinn brought that bottle to Adhara some time before Quinn and The Quasars went on tour. She then invited Tigre Stripes to visit her at Pearl Palace under the pretext of apologising for attacking him at the autograph signing last year and when he arrived she seduced and killed him.”

"My fiancée didn't seduce that man," Serpentine insisted forcefully. "Get that thought out of your mind for a start.”

“All right,” Aleister said with a nod of his head. He felt sorry for his old friend Serpentine. It had been common knowledge in their class at school that Serpentine loved Quinn but she didn’t feel the same way. Their betrothal was an arrangement between their two families that Quinn had no choice about. Like her mother, Varianna she was considered to be a cursed child and by Varunian custom that meant that she had to be married into another kingdom. Quinn and Serpentine had been betrothed since they were two years old, a fact that had seemed to mean nothing to the princess for a very long time.

Throughout high school Quinn had dated Asgar, a prince from the planet Niefleheim and though they had broken up before their senior year, the former couple continued to maintain a close friendship. That was why it was possible to believe that Quinn might have seduced Tigre Stripes despite her engagement to Serpentine. It was not likely but it was possible.

Choosing to believe that Aleister no longer considered the seduction theory possible Serpentine said, “I don’t understand why that bottle is so significant and why it seems to be the basis for your incorrect assumption that Quinn is the killer.”

“How is it that you don’t know your own planet’s history?” Varianna asked with a sigh before Aleister could respond. “You heard me say that the bottle was a family heirloom and had belonged to Queen Maris. Don’t you know who she was?”

“Of course I know who she was,” Serpentine replied, puzzled by the manner in which Varianna had been speaking to him. “Maris was a Queen Consort of the Fish Kingdom during the Warring States Period.”

Varianna nodded, “That’s right and she was also one of the most famous poisoners in Varunian history. According to legend, Queen Maris poisoned everyone who got in her way to ensure that her sons from her previous marriage would inherit the throne of the Fish Kingdom from their step father King Marlin. The Warring States Period ended when Queen Maris was able to marry her eldest son off to my ancestor Thalassa, the first cursed child of the Mer Kingdom. Their union not only insured that he would inherit the throne but brought about the lasting peace on Varuna we still enjoy to this day.”

“And whilst that’s truly wonderful, what does it have to do with Quinn supposedly murdering that man?” Serpentine asked with some exasperation. He felt tired and stupid. He did not know much about Queen Maris because he was a prince of the Serpent Kingdom. He was not required to know much about the ancient history of the other three kingdoms on Varuna. Now he was missing something and his ignorance was aggravating his future mother-in-law. Serpentine promised himself that as soon as this fiasco was over, he would learn as much about the history of his planet as he could.

“The bottle belonged to Queen Maris, a well known poisoner. Do you really not understand?” Varianna asked glaring at Serpentine. Quinn’s engagement to the serpent prince had been arranged between the children’s fathers. Neither she nor Serpentine’s mother had been particularly in favour of an arranged marriage, each preferring to allow their children to choose for themselves. Varianna had regretted her husband’s decision when Quinn had confided in her about her childhood sweetheart Asgar and she regretted it again now that she saw how simple minded Serpentine was.

Aleister cleared his throat, “If I might err, explain?” he said uncertainly, cutting in before Serpentine had a chance to respond. “Tigre Stripes was killed by the Tears of The Abyss poison which was the preferred killing method of Queen Maris. Whilst it was relatively easy for a queen to come by thousands of years ago, Tears of The Abyss is a restricted substance in the Alliance and isn’t usually available outside of research laboratories where it is kept in the smallest of quantities.”

“I understand that,” Serpentine interrupted with some impatience. “But what does that have to do with Quinn and that damned old bottle?” he snapped. Serpentine chuckled as if thinking of something amusing for the first time and then said, “Don’t tell me you expect me to believe that the bottle had some ancient poison in it that was still somehow potent.”

Despite his deeply tinted glasses Aleister looked at Varianna and was not surprised when their eyes met. “What is it?” Why are you looking at each other like that?” Serpentine demanded when he saw the look that passed between his future mother-in-law and old friend.

“Because the bottle did contain poison!” Varianna snapped, barely able to contain herself. It was a side of the Queen of the Fish Kingdom, Serpentine had never seen before. Normally Queen Varianna was so poised. So cool, calm and collected but now she seemed like a completely different person. “That bottle contained enough poison to kill an entire army. That’s why it was kept under lock and key in our family’s private vault at Pisces Palace.” Varianna explained, making a noticeable effort to speak evenly to her daughter’s betrothed.

Suddenly a thought dawned on Serpentine as he took in what Varianna was saying. At last he understood why she was upset with him. When Aleister had stated that only a member of the Zanni family could have authorised the removal and transportation of the bottle, Serpentine had immediately assumed that the motive for murder was another thief by the despicable Tigre Stripes and tried to explain away that motive by stating that Quinn had probably brought the bottle to the station because he didn’t realise that the bottle contained the murder weapon. In an effort to clear Quinn’s name he had ended up making her look even more guilty than before.

Serpentine wracked his brains trying to think of something, anything he could say that would repair his mistake. What was it that Aleister had said previously? He had been too distracted by the mention of Quinn supposedly seducing the dead man, to pay attention to the rest of that his old friend had been saying.

At last Serpentine remembered what Aleister had said, ‘We believe that Quinn brought that bottle to Adhara some time before Quinn and The Quasars went on tour. She then invited Tigre Stripes to visit her at Pearl Palace under the pretext of apologising for attacking him at the autograph signing last year and when he arrived she seduced and killed him.’

“Correct me if I’m wrong but didn’t you say that you believe Quinn invited Mr Stripes to Adhara under false pretences and then killed him?” Serpentine asked, careful to avoid mentioning the supposed seduction.

“That’s rigtht,” Aleister confirmed with a nod. At last it seemed that Serpentine was on the same page as everyone else.

“Ok,” Serpentine replied with a nod that mimicked Aleister’s. “So you’re saying that the security force’s theory is that Ula Quintilica, Princess of the Fish Kingdom of Varuna is stupid enough to invite a person of no consequence, whom she is widely known to have had an altercation with, to her home on this elite and well secured space station? She then decided to use the only method of killing that would ensure that she was the primary, if not only suspect, to kill this man whom she had just seduced apparently and the piece de resistance was leaving his naked body in her bed at the very time when it was most likely to be discovered? That’s why you arrested a princess of one of the top tier planets and it is what you expect Quinn’s mother and I to believe and that’s why I’ve been spoken to as if I’m a damned imbecile? Serpentine raged.

“Yes,” Aleister replied, allowing his heavily tinted glasses to slip just a little so that his piercing blue eyes met Serpentine’s over the rim of his glasses. He didn’t like the haughty manner in which the princeling had spoken to him and enjoyed the involuntary shudder Serpentine gave as he averted his eyes. Aleister pushed back up his glasses covering his eyes. No one could stand to look at them too long. Not without dire consequences.

Despite his annoyance, Aleister could not deny that when Serpentine laid out the case like that it did sound incredibly stupid and unbelievable but Aleister had been left with no choice but to arrest Quinn after his commanding officer Captain Ulf had ordered it. It was only when Aleister and his colleague had arrived back with Quinn in custody that they had been informed that Captain Ulf had been called away to his home planet Duat for a religious festival and would not be returning for the foreseeable future. As the second in command, Aleister had been left to deal with the fall out from his superiors orders. No matter the outcome his career was ruined.

“It doesn’t matter how stupid it sounds,” Varianna moaned, “My daughter is innocent but there’s enough gossip fodder here to ruin her reputation for all time. There was obviously no choice but to arrest her don’t you see? The bottle alone is enough. No one will believe that she didn’t bring it to Adhara herself because there’s really no other way for it to have gotten here.”
Labels: Varianna
Reactions:
Miss P. Candice Goddard
I'm a human and I like writing. I'm inquisitive so I enjoy learning about new things but mostly about people and human culture.