Quinn and The Quasars: Chapter Eleven 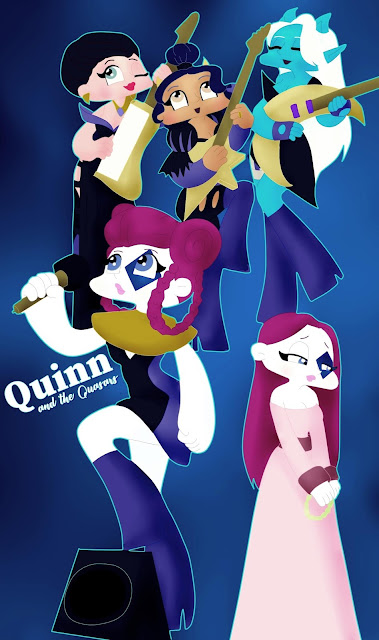 Read from the Beginning: Chapter One

Varianna walked over to one of the unoccupied seats and sat down. Normally she would have taken the time to exchange greetings with her daughter’s friends but there was no time for that now. Quinn’s reputation and future were on the line. She simply had to get to the bottom of this annoying mystery. “Continue with what you were saying,” Varianna said, directing her attention at Ms Kim. “You were saying that you let Tigre Stripes into the palace just as Meri was leaving. What happened after that?”

Kim Ji-Eun bowed slightly “Nothing happened after that your Majesty. Tigre Stripes said that he had instructions to wait for the princess in her study and since I had a message from her highness confirming that it was not untoward, I took him to the study, ordered some refreshments to be brought up and then left him to wait whilst I went back to my duties,” the Tokkian said matter-of-factly.

Varianna studied Ms Kim’s face. When she and Meri had entered the room unnoticed earlier, she had listened carefully to what the servant had been saying and observed the confidence with which she was speaking as she mentioned how Meri had been there when she had unsuccessfully tried to contact Quinn. The mask of confidence had only slipped from Kim Ji-Eun’s face once and that had been when Meri called out and said that the Tokkian was lying. At that moment, an expression of panic had passed over the Ms Kim’s pretty face. Varianna wondered if Kim Ji-Eun merely had been startled by the sudden interruption or was she panicking because she had been caught out by the very person she was lying about?

The queen glanced at her daughter’s handmaid who was looking at her with an anxious expression on her face. It was clear that Meri could hardly wait to speak. Varianna nodded her consent for the woman to speak and Meri immediately turned on Ms Kim. “You’re a liar,” the Varunian woman said, “I have no idea what you’re talking about.”

“You’re the liar,” Ms Kim spat back. “You were standing right there when I tried to get through to Mina. Don’t deny it!”

“I.. I,” Meri stuttered and took a step backwards.

Varianna was surprised by the hesitation in the woman’s voice. She had assumed that Ms Kim was the culprit but from the way Meri’s voice was failing it seemed that she may have been mistaken. Just as Varianna was about to ask the handmaid for an explanation, Meri found her voice, “I can’t believe how you’re warping what happened,” she said glaring at Ms Kim. “That’s not what happened at all.”

“Well then please Meri, elaborate on what happened,” Varianna snapped. “What do you know about this?” The Queen and the handmaid had hurried back to the palace after learning that there had been a break in the case. Varianna had intended to wait with Quinn and come later but Serpentine had reasoned that it was better for Quinn’s mother to go on ahead. Varianna had known that Serpentine’s motive was to present himself in front of Quinn whilst she was with her former love Asger, and she probably should have put a stop to it, but Varianna did not really want to get involved with her daughter’s love life. Her father had done enough damage arranging her marriage for her.

Hearing the tone of the Queen’s voice, Meri turned quickly and bowed again, the agitation clear on her face. “Please your majesty, allow me to tell you the truth. Last night I came to the palace to collect some things for the Quinn. I was on my way back to the venue where we were staying, when I saw Ms Kim and a man entering the palace through the servant’s entrance. I saw Ms Kim making a call on her Com-D but I had no idea who she was talking to or who the man she was with was. His face was covered by an Abzu style highway’s cloak and hat. I couldn’t even tell which planet he was from but it isn’t unusual for strangers to visit the palace. I had no reason to suspect that anything was untoward.

I didn’t like to be rude so I merely nodded my greeting to Ms Kim and the man and went on my way. That’s all I know about it. I swear on my honours as a handmaiden of the Fish Kingdom, I had no idea the man was Tiger Stripes.”

“There you see,” Ms Kim said quickly before anyone else had a chance to speak. “I knew she would use her species and connection with the family to get away with it. She’s lying.”

“Or more than likely you are,” Ran interrupted. “The more I think about it, the more obvious it is that the only person who could be behind this is you. You keep using species and supposed nepotism as a shield but even the information we have from Roxy and her little friends only mentions your name. If Meri was really with you, what reason can you give for a Bim, a Gondorian and a Flababian making no reference to Meri and only naming you?” she asked emotionlessly.

For a moment Kim Ji-Eun did not reply as a mixture of emotions were displayed on her face. It was obvious to Varianna that the woman was facing an internal struggle as she thought of a way to respond. Varianna had not been there when Roxy and her friends had turned up with the dossier, they had left with Junn but he had told her about it and she knew of the girls’ reputation for solving mysteries at school.

At last Ms Kim said, “They’re your friends and acquaintances, they go to school with Prince Junn. Obviously they’ll want to help his sister out and the best way to do that would be to frame the only outsider in the palace.”

At that moment the door opened, and Quinn walked into the room flanked by Scully Golgotha and two security officers. One was Alister Trice, the other, the officer who had been with him earlier when Quinn was arrested. Serpentine and Asgar followed closed closely behind.

No sooner had Quinn entered the room than Kailani ran over to her and hugged her, ignoring the fact that her friend was still wearing her stage costume or the disapproving look of the security officers. “Oh my I-Am, are you ok?” Kailani asked squeezing Quinn tightly. “We’ve been so worried about you.”

“Don’t worry about it,” Ran said from her seat. Ran was pleased to see her friend but unlike Kailani she was not one for emotional displays. “We know you’re innocent and we just want to prove it.”

“Yeah!” Kailani exclaimed, releasing Quinn from her grasp, “and I think we were just about to prove it too.”

“Yes, we were told that there was some new incontrovertible evidence,” Aleister cut in when he thought that the reunion had gone on long enough. “Do you mind telling me what that is?”

“What the Duat are you talking about Aleister?” Indigo asked looking at her old school friend with confusion. “We don’t have any incontrovertible evidence.”

“You don’t, but we do,” a voice said from the doorway. All eyes turned in that direction and there were the three schoolgirls, Roxy, Duchess and Rina and the Quasar’s manager Mr Lee who appeared to be unconscious but was being held up by Duchess, whilst Rina carried a golden case in her arms. “We know who framed Quinn for killing Tigre Stripes,” Roxy said with a smug smile.
Labels: Indigo Kailani Pearl Palace Quinn Quinn and The Quasars Ran Varianna
Reactions:
Miss P. Candice Goddard
I'm a human and I like writing. I'm inquisitive so I enjoy learning about new things but mostly about people and human culture.